When people work together to make the world a greener place, everyone wins. From sharing information on forgotten horticultural strategies to dispelling myths or misgivings about invasive species, the Indiana Native Plants Society (INPS) tries to perpetuate a winning formula for all who seek their guidance.

Enter Ellen Jacquart, Wisconsin native, Indiana transplant, and the recently elected INPS president who cemented her decision to inspire others and live for the land when she earned her master’s in botany from Butler University. Jacquart graciously sat down with Greenscape Geeks recently to talk about her career, her passion, and her pride for the work being done in her community toward restoring natural areas across the midwest.

Greenscape Geeks: What were you doing before you joined up with INPS?

Ellen Jacquart: Well, I’ve been with INPS for 25 years, but my job was a botanist working for Butler University. There used to be a Holcomb Research Institute there that did environmental research. That was my first professional job once I had my master’s in botany. Then, I became the first forest botanist for the Hoosier National Forest for eight years. Then, I came to The Nature Conservancy for the rest of my career.

GG: What drew you to this career path? 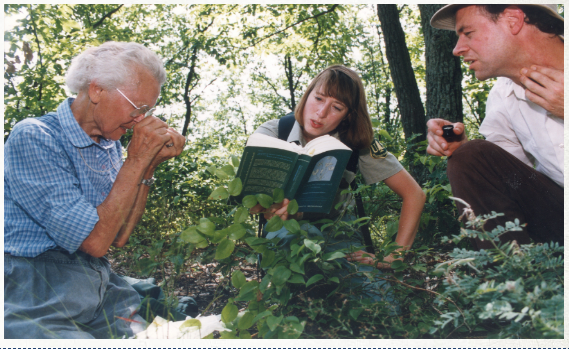 EJ: Since I was a little kid, I was outdoors all the time! I was looking at plants but, really, I loved aquatic invertebrates when I was a kid. Any puddle that had anything wriggling around in it, I had to stop and look to try and identify things. I’ve always been interested in ecology, but I became more drawn to plants as my education went on. As I started getting jobs out of college, I realized that I didn’t want to teach and I didn’t really want to do research. I kinda wanted to do land management [with the question being] “how do you preserve the diversity that is out there?” This led to understanding and being concerned about invasive species, which is a big part of land management that goes on–keeping the invasive species from harming the diversity of a preserved or protected area.

GG: As an INPS blog recently wrote, Carmel, Indiana could become a butterfly champion city by putting more value behind milkweed, a food source for monarch butterfly larvae. With acts like this as an example, what do you think makes the Midwest region as a whole primed to be an epicenter for the revitalization of horticultural growth?

EJ: I think the Midwestern states have always had this sense of knowing about special, natural areas out there. Because the Midwest is such a heavily farmed area, most of [those natural areas] are gone. Over the years, people saw one natural area after another being plowed up and planted. I think that really increased the appreciation that the Midwesterners had when most of your landscape is already gone, [to know] how important it is to protect what is left. The Nature Conservancy and Ecological Society of America started in Illinois, a lot of early conservation efforts came from here.

GG: Building off of the awareness in the Midwest, have you noticed a resurgence in organic and native home gardening from your campaigns with The Nature Conservancy (TNC) and INPS?

EJ: Absolutely, particularly from INPS. [Our] Facebook page is kind of amazing; it has over 12,000 members and most days it will just reaffirm my faith in humanity [laughs].

GG: That must be nice to wake up to!

EJ: It is! This time of year you’ve got people posting everything they’re seeing in their backyard and saying “what is this” and “I’ve never seen this before.” So, you see people learning that and how easy it can be to grow and propagate native plants. We also see the flip side where people post “what is this all over my backyard”, and we identify it as “purple wintercreeper and that’s not good,” which is how they learn about invasive species. I’ve given talks for decades on invasive species, and it is one thing to be in an audience listening to some woman talk about it and be sort of removed; but, when you’re taking pictures in your backyard wondering what that is and people online tell you why it’s a problem and what you should do about it, you realize that you have a role and can do something about it in a much more immediate sense, which is very satisfying.

GG: Besides your Facebook group, what other 21st century tools is INPS using to help reach members in the community?

EJ: We are currently in the process of redoing the website so that it is more mobile-friendly and we’ve reorganized the information so that it easier for people to get information. For the past several years, I’ve been working with a group at Indianapolis University to develop a lengthy species list–a couple hundred–of native plants for pollinators. More specifically, which pollinators use [which species] and what habitat the plants need for example sun, shade, or wet, medium, dry soil. They’re turning that into a plant finder app specifically for Indiana so you can put in your yard characteristics and find out what your options are for growing.

GG: Are there any common misconceptions or faulty assumptions of INPS that you have to deal with frequently?

EJ: I think any of them have to do with the idea that “some” invasive species aren’t that bad because they’re pretty, they smell good, or they taste good. So, the benefits have gotten prioritized over the environmental and ecological damage that the species is causing. We’ve done the analyses to explain and explain that this is more harmful than it is helpful. We shouldn’t be making excuses for things that are invasive. Yes, purple loosestrife is pretty. That doesn’t mean it hasn’t destroyed thousands of acres of wetland and ruined the habitat for hundreds of species that would’ve lived there. So by weighing the advantages and disadvantages, it’s clear that these species are harmful and shouldn’t be recommended.

GG: Outlining the bad can set the record straight for invasives, but what are challenges you face in detailing the high points of native species that aren’t as attractive to our senses?

EJ: It’s tough getting people to understand the cultural requirements of the species involved. There may be 30 people recommending sun-loving species on a [gardening] Facebook page, and yet they don’t know what the soil type [is] or how much moisture they have; and, without that, you can’t really make plant recommendations. Having resources to say that “it’s more than just sun and shade” to understand every species interaction in your setting is different. Extension services in Indiana could do a better job at distributing information on native landscaping; their publications may mention that a plant is a native species but [they] may not satisfy all the queries from the public who want more information. People’s gardens may fail because they didn’t have the right information going in. You get this consideration that native plants are difficult or that they’re messy. In general, most of them have fairly wide tolerances and can be easy to cultivate. You just have to know the basics before you start plunking things in the ground!

GG: Speaking of native planting that is both beautiful and accessible, what are two native species with amazing blooms that our readers could supplant an ornamental or non-native choice with today?

EJ: Callery pear is the tree from hell [laughs]. They’re incredibly invasive and causing huge problems in Indiana now. Instead, you can plant shadbush or juneberry. It has a similar flowering time and color. Burning bush is a mid-sized shrub that is becoming very invasive in the forest of Indiana. People plant it for the red foliage in the fall, so instead, something like black chokeberry –which has white flowers in spring and red leaves in fall–would be great.

GG: Great recommendations! An INPS membership provides a great sense of community and a wealth of information about plants as well as exclusive events. What other benefits can people expect from joining up?

EJ: One of the great things is the INPS Quarterly Journal. It’s sort of a deep dive on Indiana plants. It provides well-researched and interesting articles on particular native plants. I just wrote an article on the invasive plant mile-a-minute vine, so look for that in the upcoming issue! We also have the Botany 101 column that covers things like differences in botanical families. This is basic information for those who want to know more about plants in an easy-to-read format.

GG: That’s a great list, especially if you’ve got a penchant for the outdoors!

GG: Any parting advice for budding green thumbs out there who are ready and willing to start? Where is the best place for them to start?

EJ: I’d tell them to join INPS. As our website is renovated over the next four months, we’re going to be adding in a lot more resources on landscaping.

EJ: I think so because the whole look of it is going to change and we want to draw attention to it to assist people in finding the information that is right for them.

GG: It’s an exciting time, and thank you for your time and efforts!

EJ: There’s so much going on! 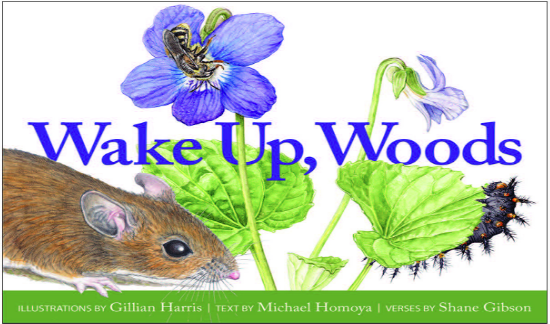 There is much more to come from INPS this year–like the annual conference being held in Ft. Wayne in addition to a few day trips open to the public. There is also an upcoming children’s book in the works for this year. Titled “Wake up Woods”, it features artwork by Gillian Harris, text by Michael Homoya and verses by Shane Gibson describing the magic of springtime.

A peek at the upcoming children’s book, “Wake Up, Woods”

INPS also has taken over the Grow Indiana Natives program that publicizes and promotes those businesses that sell native plants and agree to not sell invasive plants, and Greenscape Geeks is proud to be on that list!

If you love the outdoors or want to get involved, visit the INPS website to find out more! If you’re already deep-seeded in the INPS ecosystem (every blog post needs a good pun), reach out and get certified from Grow Indiana Natives to showcase your ecologically sound yard!